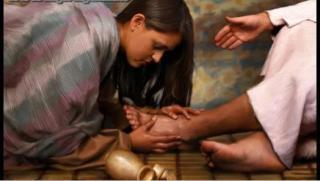 A few years ago I was talking with my oldest daughter and she asked me the strangest question. She was speaking on her cell phone with a group of friends that were having a social media conversation around the following question, “Can you delete your ho-ness”?

I asked her what is “ho-ness”?

She began to describe the way the conversation had begun, that they were discussing a female that they had all known in high school who was known back then as a “ho”. Supposedly she was now dating one of their friends and claimed that she no longer was the woman of her past.

I looked up the term from an urban dictionary/ ebonics type of slang and it says a ho is another name for whore, “  a woman who engages in promiscuous sexual intercourse, usually for money or personal gain; prostitute; harlot; strumpet. verb (used without object), whored, whoring, to act as a whore. A woman who uses her body or gives the impression that she will for material gain or to boost her own ego”.

So they were having a discussion about someone being able to just delete their “ho-ness”.

My daughter turned to me and seriously asked me this question once again and I immediately said yes. In that short moment, I was reminded that when I was a teenager by definition I may have been described by others as a “ho”. I became sexually promiscuous at a young age for many reasons. One of those being that I was sexually abused as a young girl and the other was having major daddy issues, causing me to be unable to discern the premature relationships I was in and thinking that lust and love were the same things. But then something happened that deleted my ho- ness.

After a few more minutes of discussion that this girl was a serious ho not just your average ho and someone else making the statement “Once a ho… always a ho”. I couldn’t stay quiet even though this was a social media young person’s conversation. I began to explain loudly about the women in the bible that had their ho-ness deleted by Jesus.

These women were serious about promiscuity.

Imagine you were there with the woman caught in the very act of adultery. There were these men that had dragged her to Jesus so that he would condemn her to death according to the laws of the Torah. But they did not understand that he had come to delete her ho-ness!

There was the woman at the well who Jesus exposed by putting a prophetic mirror in front of her, telling her about her past, her present, and the possibility of her future. Surely when their conversation was over her ho-ness was completely deleted.

Mary Magdalene may be my favorite ho-  After he deleted her ho-ness she became a true follower of Jesus and is mentioned by name as one of the women that had the privilege of being at the tomb when Jesus was resurrected.

In Jesus’ lineage, there were a few women that others called a “ho” or harlot in biblical language and again they received the privilege of having their names mentioned in the Kingly genealogy. Women like Rahab and Ruth and Tamar who just pretended to be a ho to get her destiny fulfilled.

A few weeks later I was thinking about this interaction and I remembered something very significant and also funny. When my husband and myself had decided to get married we were new believers and did not really understand any Christianese language. We heard it preached and our Pastor teaching about “fornication” being sin but didn’t understand what it was. We were living together and already had a baby and never understood that you weren’t supposed to be having sex when you weren’t married. Whenever someone said that fornication was wrong we kept saying “Amen”, not getting that we were the people they were talking about!!  So when our Pastor taught us this in our marriage counseling we both decided to refrain from having sex until we got married 5 months later. We prayed and asked God to forgive us and to re-virginize (our new word) us until our wedding day. This was not easy as we had lived together for 4 years but we believed that Jesus could delete our ho- ness.

30 years later of being a believer and I have seen the forgiveness of Jesus and the grace of God delete more than just ho- ness from so many people. Drug dealers, liars, thieves, alcoholics, addicts, fornicators, adulterers, prostitutes, murderers, prisoners, and demoniacs all transformed. So I  had to share that I am a firm believer that today you can delete your ho ness, clean your slate, re-virginize, erase your past and have a fresh start, cause Jesus came to delete our ho-ness.

4 Main Lessons to Live By