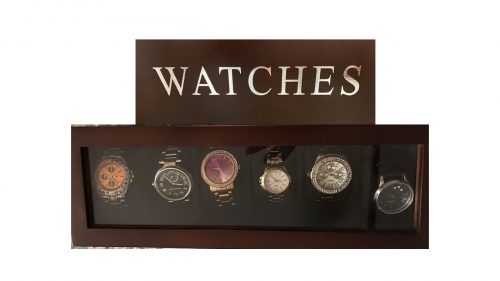 Over an extended period of time in my life, I had collected about fifteen watches that after many uses their batteries had died and they were not telling time anymore. They were all different and unique and I didn’t want to throw them out as I had wanted to get new batteries for them. I had 2 watches that I had been wearing for the past 2 years or so, a Micheal Kors watch and a Timex.  These were my now watches but I secretly desired to get my other watches fixed so I kept them all in one of my jewelry box drawers. I am aware that many people do not wear watches anymore and that most people would maybe never have that many watches but I had a fascination with different watches and many had been gifts given to me, so I wore them like decorative jewelry as well as functionality to mark time.  During the Covid Season of 2020, I found a place where they only charged a minimum amount to get the watches refitted with new batteries so I decided to take all of my watches to be restarted. There were about ten watches that I deemed valuable enough to me and I dropped them off.

Prior to picking them up, I pondered a lot about the timing of getting them fixed now. After less than a week of wearing my new watches, the two other watches that I had been wearing both simultaneously stopped working. I did not find this to be a plain old coincidence as this is never my mode of thinking when things like this occur. So, I prayed and asked The Source what it was all about and the following answer came to me.

“My times and seasons have been restored and realigned”.  This meant a few things to me and I began to ponder about the application of the meaning. I felt that overall, that time had been reset and that due to the slowing down of time there was a resetting of time as well. These watches represented the recalling of time that needed to be carried forward into the present day and reset with this new timing that was now occurring. I saw each watch as a time or season and the lessons that had been learned or authority attained during that marked set of time in my personal life.

Anyone that had been apart of the 2020 COVID shut-in/quarantine would have definitely experienced a shift in time of some sort. The whole planet went from being too busy and feeling like there was not enough time to super slow down almost Matrix-like movement of time for everything. This was such a time of uncertainty and uncomfortable for many people who were super busy doing, so much so that they forgot all about being. This made me ponder the scripture in Ecclesiastes 3:1 that says;

For everything, there is a season, a right time for every intention under heaven

a time to plant and a time to uproot,

a time to tear down and a time to build,

a time to mourn and a time to dance,

5 a time to throw stones and a time to gather stones,

a time to embrace and a time to refrain,

a time to keep and a time to discard,

a time to keep silent and a time to speak,

9 What does the worker gain from his efforts? 10 I have seen the task God has given humanity to keep us occupied. 11 He has made everything suited to its time; also, he has given human beings an awareness of eternity; but in such a way that they can’t fully comprehend, from beginning to end, the things God does.

I began to think about all the watches that I owned, some were fancy, some plain, different colors and metals and decorations. I had a watch from England that had the flag on it, a blue watch that had the word FAITH written on the face of the watch, a diamond watch, a gold watch, a silver watch, a sports watch with timers, each worn for different reasons and times.   I kept thinking about how each one of them was from a different period in my life and that they represented times, seasons, promises, and even dreams that I had and how I didn’t let go of them but kept them until the right time to reboot them and for them to start running again aligned with the present-day timing. My “FAITH” watch would need a new band if I planned to fix it and that blue band actually almost cost me more to buy than it cost to get batteries for all of the watches.

This spoke loudly to me personally, but I again remembered that I live out my prophetic and that this wasn’t just a message for me but for others as well.

I thought about how each time you come into agreement with heaven and speak the will of The Source into the earth, God’s eternal time and plan re-sequences and re-aligns the earth. I was also reminded that in December of the previous year the main message for me for this coming and present year was “Heaven comes down to Earth” which had been a previous theme that I had yet to see fully manifested.

Eventually, a few days later I felt led to get the final two watches reset right away and took them in for new batteries. The man at the store gave me a hint and told me that I should pull out the pin when they were not being used to conserve the battery energy. This seemed like a good idea until I kept putting a different watch on and forgetting to reset and align the time with the current time. This again became a message to me about always taking a bit of time to make sure that I am aligned with the true time. Not with the time my physical watch marks but the Universal Time that is established by The Maker of Heaven and earth. It was now important for me to become aware of how much I was not consciously thinking about the concept of time. I purchased a wooden watch box to keep all my fancy watches and to mark this message that I received so I would not forget.

Medication Addiction - How I was my own drug dealer