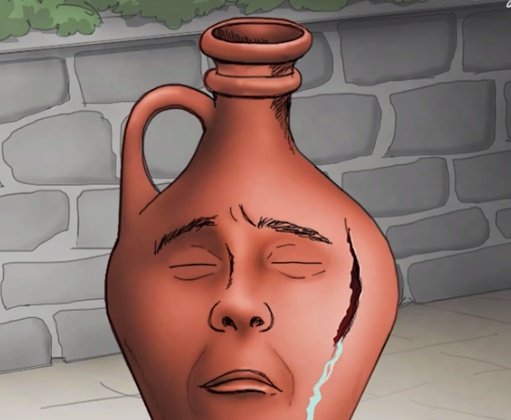 There once was a clay pot named Chippy.

They had named him Chippy for a very good reason.

When he was a wee little pot he used to get bumped and banged.

Occasionally he was even dropped.

Until one day they noticed that he was chipped and broken and he had a wee little crack in his bottom.

Everyone thought Chippy was useless, everyone that is except the Master.

For some special reason, Chippy was the Master’s favorite pot.

This fact should have delighted Chippy, but instead, it made him depressed and sad.

For every morning the Master would pick up Chippy, dust him off and carry him down to the riverside.

He would make sure to hold Chippy’s cracked bottom and tip him over and fill him up and eventually would head back to the cottage.

By the time the Master would have reached the cottage and opened the door, to pour out what he had put in Chippy, there were only a few drops left.

Chippy couldn’t understand it, because of him the Master had to go down to the riverside so many times yet the Master chose him to be filled up and poured out.

Chippy was so upset over this that one day he decided to ask the Master why He didn’t just choose one of the bigger and newer pots that could definitely hold more water when He went down to the riverside.

The Master became a bit saddened at Chippy’s request.

Yet the Master who was kind and gentle told Chippy that as they walked home that he was to pay extra attention today.

As they took that familiar stroll down the path from the riverside to the cottage Chippy noticed something that he had never seen before.

There along the pathway were the most beautiful, multicolored, wildflowers. They were standing bright and tall.

Chippy brought this to the attention of the Master and the Master  replied;

“This is your handiwork Chippy”

“For as you have allowed me to lift you and tip you over and pour you out and because you were chipped and broken and were unable to hold it all in and while you were letting it all flow out you were creating this garden of beauty!

You were prosperous in the task intended. Fulfilling your purpose in the Master’s Hands”

So today if you are feeling a little chipped or broken, banged or bumped or maybe you might even have a little crack in your bottom.

Don’t feel like Chippy, just because you are not being used to carry water back to the cottage. The Master may have designed you with another purpose in mind.  So pay extra attention today and look for all the wildflowers that are along the pathway of your life and remember to be prosperous in the Master’s hand.

Lamentations 4:2 The precious Sons and daughters of Zion Valuable as fine gold. Are now considered as pots of clay the work of the hands of the Potter

I Found a Nugget Today